Rush App was founded in 2020 by Kiril Kirilov and Stanislav Stankov, and it is a Shopify shipment tracking software with over 1500 customers so far. They are a VC-backed startup, and just like many other startups, they need to grow fast, so they’re always on the lookout for tools that will help accelerate their growth, save time, and save money.

“Hiring writers is hard nowadays because a lot of people who never wrote content before regularly apply for job posts that require a certain level of experience,” says Kiril Kirilov, a co-founder of Rush. “In a fast-growing startup like ours, we don’t have time for a lot of hand-holding and need people who can quickly get up to speed with our guidelines and start creating high-quality content.”

Like many others, the Rush team tried using writer marketplaces to hire writers but quickly realized that they couldn’t keep up with an onslaught of messages and unstructured applications. They needed something streamlined to help them grow their content team.

Kiril and the Rush Ltd team used Workello’s pre-optimized job description template and aligned it with their brand. They got creative and added emojis and visuals to better illustrate the kind of company they are and attract candidates with similar mindsets. They very clearly outlined their philosophy behind building a startup and sought writers who think like them. 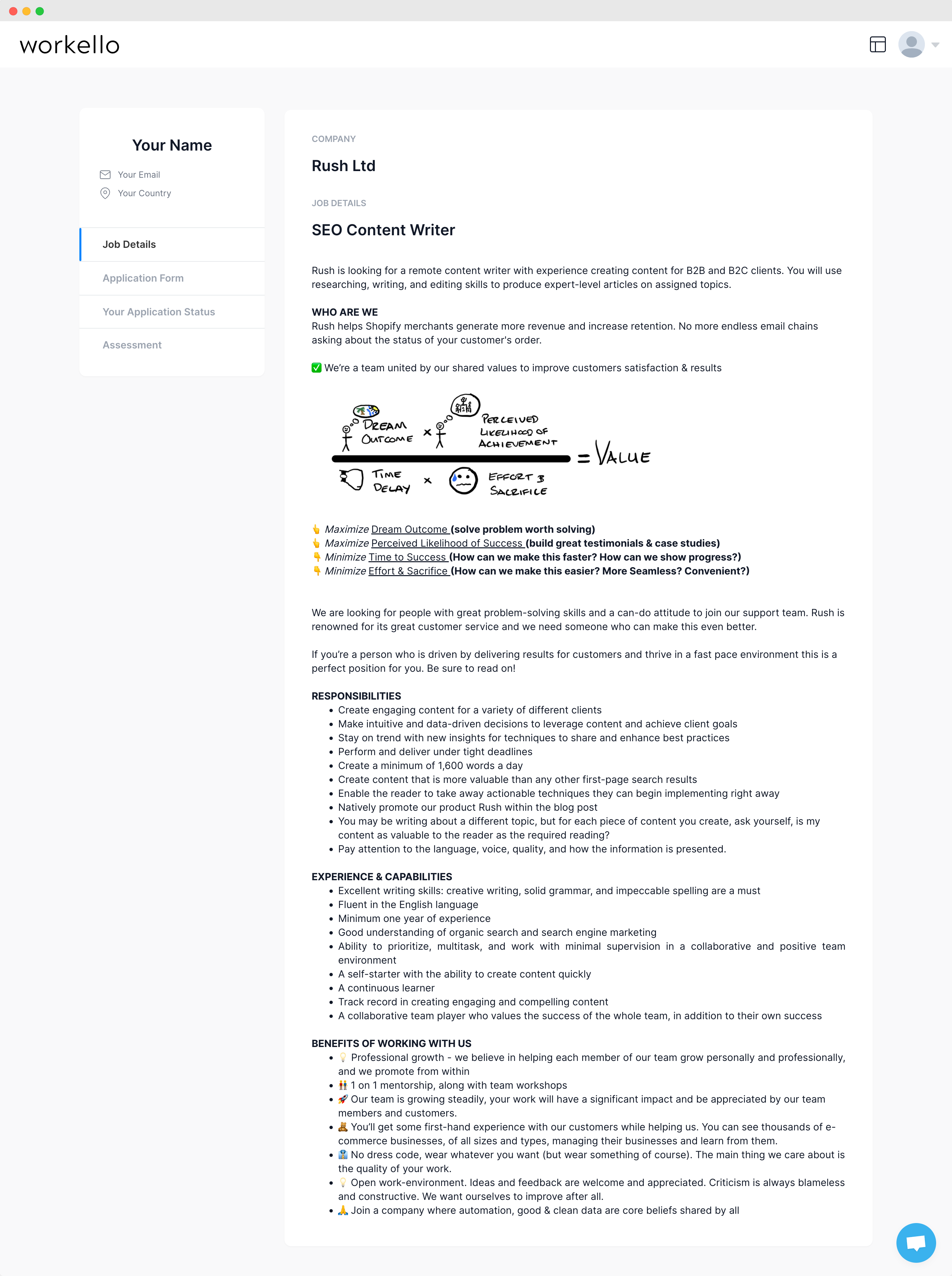 Their creativity didn’t stop at the job description. The Rush team crafted an assessment task and based it on Workello’s pre-optimized template. They wanted to test their candidates’ writing abilities but also their familiarity with Shopify shipment software.

They posted their job ads on LinkedIn and in several Facebook groups focused on Shopify, writing communities, and SaaS. They received 99 candidates, tested around 40, and hired 10 new writers who now produce high-quality content for the brand.

Kiril says that hiring writers with Workello has been really easy. “First, we saved a lot of time filtering candidates because all of our candidates were fed into one pipeline, Workello. It allowed us to double down on organic outreach on Facebook, LinkedIn, and other platforms. When we set up everything, we had over 100 candidates almost overnight, and in just two weeks, we managed to hire 10 fantastic writers that don’t require a lot of handholding every day.”

“Whether you’re a SaaS company, a B2C or e-commerce brand, and even an affiliate marketer, you need the momentum, and you need the speed that Workello gives you,” says Kiril.

If you’re a VC-backed startup such as Rush and you need to grow your SEO presence, sign up for Workello today.

“You need the momentum and you need the speed that Workello gives you.”